Bee boles face in opposite direction to usual 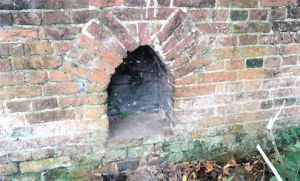 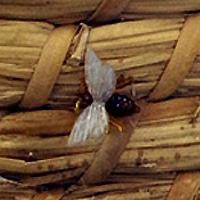 A feature of the walled garden site are three bee boles in the south wall. Niches with a pointed top, they were a way of protecting early forms of bee hives, called skeps, from the elements. Bee boles are normally constructed to face south or south-east to enable the skeps to be warmed by the sun. But these, of course, face north. In an entry on the International Bee Research Association (IBRA) website, our chairman, Peter S.Harrington, writes that there is “No explanation of why they were built in a south wall.”

The IBRA website says that bee boles were “often in a south-facing garden wall”. And it describes skeps as “coiled-straw hives used before the introduction of wooden hives in the late 19th Century.” Visit the IBRA website to read about their register and conduct a search for entry 1452. That’s the Nantwich garden. The Register was started in 1952 and currently contains 1,568 entries. Fiona Swain, a local beekeeper, said: “Bees were important when the Walled Garden was built as wax was needed for candles and honey was important for making mead – a popular drink at the time. I suspect honey would have been used as an antiseptic to dress wounds, as it was in the First World War.”

FIONA displayed the skep in Nantwich Museum as part of a mini display during the Nantwich Food and Drink festival weekend in September 2014. She also showed the bee smoker (above). She explained that smoke was introduced to a hive when the beekeeper wanted to remove the bees to reach the honey. It was not to make them drowsy but made them think the hive was on fire, inducing them to open the honeycombs to get the honey to safety.

Thanks to Fiona Swain for her help with this article.

The bee boles by numbers and position 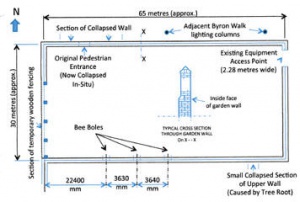 More about the bee boles can be found in the garden plan issued by the Nantwich Walled Garden Society. These two illustrations are taken from one page in our plan for the restoration of the walled garden, available by clicking on this link (garden plan link to be inserted).

Diagram 1 –  the dimensions of a bee bole.

Diagram 2 – the location of the bee boles in the south wall of the garden.