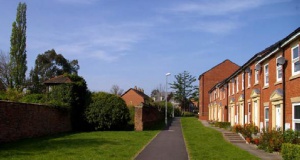 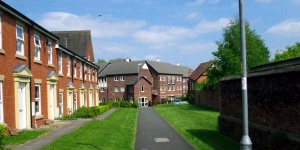 Byron Walk looking towards the town. In the centre of the picture is the retirement property, Beatty Court. The potential walled garden is to the right of this picture (in the shade) and further on, again to the right, is a glimpse of a neighbouring walled garden (see below). 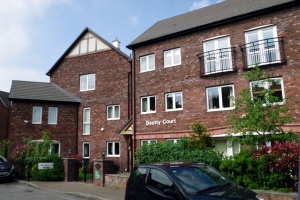 The Red Lion Lane aspect of Beatty Court – potentially one of the “neighbours” of the Nantwich Walled Garden. The actual address of the property is Holland Walk, off Ernley Close, which is on the opposite side of the building to this one. 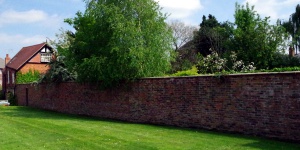 The “next-door neighbour” to the potential Nantwich Walled Garden is this garden (left). It is actually the garden of a house in Welsh Row, and not the garden of the house in the distance, which is in Red Lion Lane. The area of Welsh Row which includes the property in front of the garden on the left has a number of walled gardens according to one website about listed buildings in Nantwich.

Other walled gardens in or near Nantwich are at Churche’s Mansion, Nantwich, and Dorfold Hall, Acton, Nantwich