A royal visit is part of the history of the garden 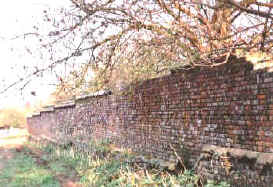 The Old Walled Garden was part of the gardens laid out by Richard Wilbraham after he built his family house on the adjacent site in 1580 during the reign of Queen Elizabeth I.

James Hall, in his “History of Nantwich” writes: “The Wilbraham family were long resident in the Town of Nantwich and were never failing guardians of its rights in by­gone days.” The Wilbraham family were resident in the house for two centuries and we know that (to quote Hall) the “gardens with high walls of brick were ornamented with stone carvings of armorial bearings and grotesque devices.” The Wilbraham archives have been researched and tell us the many and varied features which the garden contained – for example, an arbor, a banqueting house, columns, flower pots, canals, etc. The original bee boles are still intact in the southern wall. They would have contained the wicker beehives in days gone by.

On August 27, 1617, King James I of England was a guest in the house and visited the nearby brine workings (the salt producing houses) of Nantwich. He almost certainly walked in the gardens and probably used the old door into the field in the north wall to walk to the brine works.

This doorway had “projecting stone dressed brick piers and a massive stone lintel with chamfered and slightly cambered head surmounted by a coved coping” – words written in a Department of the Environment report on August 1, 1986.

The wall itself is of “small red bricks in English Garden Wall Bond with stone dressing,” says the report, adding that the enclosure is of “quadrangle form with walls up to three metres in height. High stone plinth, of two brick thickness, with wall reducing to one-and-a-half brick thickness above the stone brick cornice. The two-section-wide overhanging stone coping has coves on the underside and weathered upper surfaces to the lower section. The upper section is stepped up with weathered upper surfaces flanking a central roll. Both the plinth cornice and the coping return vertically at the many steps in the level of the wall.” The wall is a Grade 2 listed building.

Part of the site of the Wilbraham gardens was used in the 19th century for magistrates’ offices and a police station. The Old Walled Garden is all that remains of this historic site. In the 19th century, a stone gateway with carved lionesses, leading to the garden was removed and re-erected at Dorfold Hall in Acton.

An old sketch plan of the Welsh Row area showing the location of the garden (shaded green). Townsend House (later to be Townsend Brewery) can be seen next to it. The frog channel in Welsh Row is believed to be a drainage ditch.