Why it is important that we save garden

Nantwich Walled Garden Society was launched in June 2004 after our first Secretary, Pat Fulford, woke up one morning and decided “I’m going to save that garden”. Sadly, she died before her dream could be realised.  Her first step, with the help of a group of Nantwich residents, was to set up the Campaign to Conserve the Old Walled Garden. The group wanted to save the site – which they regarded as one of important historical interest – from a proposed development for apartment buildings.  It wasn’t long before the campaign became a fully-fledged organisation, Nantwich Walled Garden Society.

The Walled Garden was once part of the gardens of Townsend House, built in Welsh Row in 1580 by the Wilbraham family – the most significant family of benefactors in Nantwich at that period. They lived in the house until 1780.  The family is mentioned in Hall’s History of Nantwich and played a large part in the development of the town and in helping its poor. King James I stayed in Townsend House in 1617.  The garden is outlined in Hall’s history and the materials used in the making of the garden are extensively listed in the Wilbraham archives which are held at the Cheshire Record Office, Chester.  The Walled Garden consists of almost one acre of land surrounded by a wall which is listed as Grade Two by Historic England. The garden is situated behind the Old Police House off Welsh Row – although there is no access through that part of the street. It can, however, be reached via Red Lion Lane or King’s Lane. These old Nantwich lanes are about 400 yards from the centre of the South Cheshire floral and market town. Much of the wall is still intact but is in urgent need of restoration. 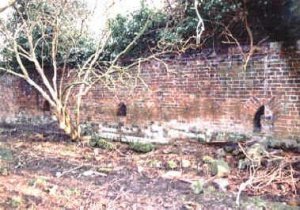 There are three recesses in one wall, believed to be ancient bee boles where wicker bee hives (or skeps) were installed, and part of one gateway, which collapsed, remained on site.
A plan to build two blocks of apartments on this historic garden was refused by the Development Control Panel of the former Crewe and Nantwich Borough Council (now succeeded by Cheshire East Council). We were delighted, as a valuable piece of the town’s history could have vanished for ever underneath a modern development. But that delight crumbled when the original developers sold the site to a development company who submitted a new proposal to develop the garden.

Nantwich Walled Garden Society believes that any proposed development of housing on this small piece of land would be detrimental to the town, which has already lost many of its important historical buildings and sights to speculators and is at present being overwhelmed by development.  In view of the significance of the important archaeological findings of Roman remains found on Kingsley Fields, next to the garden, we believe that the Walled Garden itself should also be the subject of an archaeological survey. Who knows what important artefacts would be discovered. With the departure of the archaeologists (after the removal of historic artefacts) Kingsley Fields became a large housing development.

It is the aim of the society to save and restore this garden and the surrounding wall for the people of Nantwich and as a tourist attraction. This would bring further trade to the town. We aim to restore the site to an Elizabethan garden with many of the features which were there originally, and to ensure its maintenance for future generations to enjoy.  We understand that it would be the responsibility of the walled garden site to restore and reinstate the wall. We would like an input into the way in which this is undertaken with the help of local garden experts, Historic England and the Garden History Society. There is much support from other organisations (see the Links page).  We are prepared to make every effort to raise the finance necessary to build and maintain the garden as an Elizabethan sensory garden suitable for the disabled and for all to enjoy. This should be a project for the local community and by the local community but with expert advice. 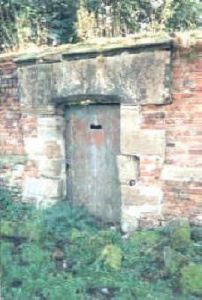 The doorway as it was originally

The same area pictured a little later. A wire fence was erected after this photograph was taken