Does “The Herball” depict Shakespeare?

If you are familiar with images of England’s famous playwright, William Shakespeare, the face seen here (left) will not seem to be that of the Bard. But, writing in the May 20, 2015, Special Historic Edition of “Country Life”, historian Mark Griffiths makes it clear that he is convinced that this is, indeed, Shakespeare.

The image is one of four on the frontispiece of “The Herball or Generall Historie of Plantes” written by Nantwich-born herbalist John Gerard and published in 1597. One is said to be Gerard himself, and the others are regarded as Rembert Dodoens, the Flemish botanist, and Lord Burghley (Sir William Cecil), the Lord Treasurer to Queen Elizabeth the First.

While it is possible that John Gerard visited the house and its gardens – or that the family and/or the gardeners had a copy of “The Herball” – it is probably not the case that William Shakespeare was also a visitor. . .

The full-length version of the “Fourth Man”, as Mark Griffiths refers to Shakespeare (right), shows the Bard in a Roman-style costume. Or, as Mark Griffiths adds, in “what passed for ‘Roman’ on the Elizabethan stage”. This is Shakespeare depicted as in a character in his play “Titus Andronicus”.  He is shown with a fritillary in his right hand and a sweet corn in his left.

Cipher clinches it for historian This is what convinces Mark Griffiths that the figure represents William Shakespeare. It is a Tudor cipher which can be seen at the foot of the plinth on which the Shakespeare figure is standing (left).
This is said to include a “stalked triangle” or spear – half of the Bard’s surname – at the top. The figure 4 can also be seen and this, according to the historian, “stands for the Latin quarter or quat. Combine this with the letter E, top right of the cipher, and you get “shake”. The two together make Shakespeare.
In the centre of the cipher, the letters OR is an heraldic term for gold, indicating the coat of arms granted to Shakespeare’s father, and so to him. At the foot of the shield is the letter W – for William.

Figures became Gerard and the Queen 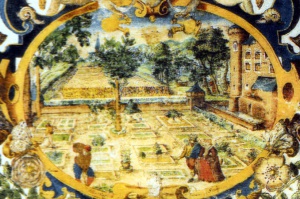 This section of the garden image (right) at the foot of the frontispiece is said to show John Gerard and Queen Elizabeth the First (bottom, right). Mark Griffiths writes that the original picture of the garden is a Dutch engraving and the two figures in that are not named. It was used on the frontispiece because it looked like Theobalds House (or Palace), with the garden of Lord Burghley, where Gerard was employed and which the Queen visited several times.

Inconceivable that Gerard and Shakespeare didn’t know each other

Mark Griffiths’ proposal that William Shakespeare is the fourth man on the title page of John Gerard’s The Herball Or Generall Historie of Plantes (1597) lends credence to the possibility that the two men must have been well acquainted. As well as making the case for William Shakespeare from clues on the engraving, Mark Griffiths noted that in 1590 Lord Burghley employed Shakespeare to prepare verse to upstage his critics. John Gerard had long been associated with Lord Burghley and provided him with information about plants and horticulture.

It was suggested that Shakespeare may have contributed to Gerard’s preface as it has characteristics of his style. In the meantime Shakespeare benefited from Gerard’s knowledge of plants even before the herbal was published.

Shakespeare moved to London from Stratford upon Avon towards the end of the 1580s. He was a countryman who enjoyed his garden whilst his plays display a knowledge of the plants of the fields and hedgerows of Warwickshire. New techniques such as grafting are featured in his plays.

Shakespeare was also interested in the treatment of disease and the compounding of drugs. It is perhaps no coincidence that a copy of Gerard’s herbal was held at Dr John Hall’s house in Stratford upon Avon. Dr Hall was Shakespeare’s son-in-law and it is likely that the two men would have discussed the use of medicinal herbs as well as the herbal.

Plays would have been performed in the royal palaces and probably involved Shakespeare. This would have been one place where he could have encountered Lord Burghley who was, or at least came to be acquainted with, both men. Gerard’s link with the royal court is confirmed insofar as he was for a time Herbalist to James I. Also he was well known to Sir Walter Raleigh, a member of the Queens’ court. It is inconceivable that two such prominent men of the time with a mutual interest in plants and gardening could not have known each other.