Support for memorial to John Gerard in garden 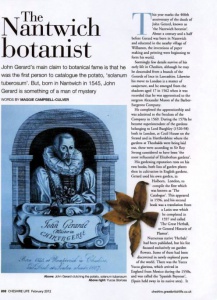 When Cheshire Life magazine published an article on “The Nantwich Botanist”, John Gerard (1545-1612), in its February 2012 edition, it prompted the Chairman of Nantwich Walled Garden Society, Peter Harrington, and Jan Greenland, a Fellow of The Herb Society, to send in their comments.

Peter saw it as an opportunity to tell a wider audience about the NWGS plan to include a memorial to John Gerard in the walled garden. He was pleased with Maggie Campbell-Culver’s article (left) which he said had been “well researched and came across very well.” In a letter published in the April 2012 edition of the magazine he wrote: “We [the NWGS] wholeheartedly support the thought that John Gerard should be honoured by the town of Nantwich and as such have been campaigning for a decade to save and restore the 16th century Nantwich Walled Garden. “Included within the Nantwich Walled Garden Restoration Plan (supported by the Herb Society) is a proposal to install a monument to John Gerard’s achievements and memory. “We feel that siting such a monument in this historic, and potentially beautiful, location surrounded by herbs, flowers and horticultural designs of the period, could be the most appropriate setting for the town’s tribute.”

Delighted at seeing “your elegant article”, Jan Greenland said in a further letter. However, she added, it “failed to address important facts about the famous son of Nantwich”. He was, she said, primarily known for his knowledge of herbs and wrote the “best-loved and most-used” ‘Grete Herbal’ in 1597. A copy of that was in Nantwich Museum, she pointed out, adding that its Elizabethan English was wonderful. For example, Gerard called dandelions “blow bells”. Jan said that the Herb Society had campaigned to have the Grade II listed wall garden “restored and used as a tranquil visitor attraction” which she was sure would attract international visitors should it be dedicated to John Gerard’s memory.

The original article and the Feedback letters can be seen on the magazine’s archive website here:
Simply click on the front cover of the appropriate editions and then find the relevant page: February 2012 edition – pages 202 and 203; April edition – page 8. Click on the page number at the top of the image – the figure 1 appears – and type in the number of the page you require. It is possible to download PDFs or print off the page or pages.

A well-known name in the world of textile design, William Morris (1834 to 1896) had “enormous enthusiasm” for Gerard’s “Herball or General History of Plants”. This was stated by Stephen E. Eisenmann writing an article on Morris for the Journal of William Morris Studies. He says that Morris found the “great botanical compendium” in his father’s library when he was a child.

In the preface to his book, Gerard “contrasted the national and personal riches earned from mining to the greater sensual and moral wealth derived from the study of plants and nature.” The Morris family invested in the Devon Great Consol copper mine on the Devon border with Cornwall. William received dividends and was on the board of directors. But, says Eisenmann, “work in the mine was dirty and dangerous.” The ends of the horizontal tunnels were short of air and cave-ins were frequent. Arsenic, a by-product of copper smelting, was in the air.

In the preface to the “Herball”, John Gerard says while he hadn’t been involved in mining he had been otherwise “profitably employed in describing such harmless treasures of  herbs, trees and plants, as the earth, frankly without violence, offers unto our most necessary uses.”

Eisenmann says the “Herball” became Morris’ Bible. He would read aloud from the book descriptions of plants “in order to recount their virtues and uses.”  MORRIS’S early glass and tile designs, including Daisy (1862) and Primrose (1862-5), with wallpapers such as Daisy (1864) and Fruit-Pomegranate (1866) “possess the directness, frontality,  proportion and schematic clarity of illustrations” in the “Herball” as well as other sources, said Mr Eisenmann.

We are grateful to the William Morris Society UK for permission to quote from Stephen E. Eisenmann’s article, “Class Consciousness in the Design of William Morris”, which appeared in the Winter 2002 edition of the Journal of William Morris Studies (JWMS 15.1; pages 17 to 37). Click on the link above and then select “Journal” or click here for a PDF version of the article.

As well as praising John Gerard, William Morris later became involved in a collaborative research project with Thomas Wardle into the use of natural silk dyes for the Leek silk industry, according to a note in the Minutes of the February 2013 members’ meeting. He wrote to Wardle confirming that he was looking for a copy of Gerard’s “Herball” to help Wardle with the project. This information highlighting the clear link between Gerard and William Morris and the subsequent industrial uses of plants has further reinforced the significance of Gerard’s work, the Minutes record.

Use of the links between John Gerard, William Morris and Thomas Wardle were suggested by member, Jan Broome.